The Washington, D.C.-based Social Progress Imperative made a splash at the Skoll World Forum earlier this month when it launched its Social Progress Index (SPI), an ambitious effort to inform and influence development policies around the globe.

Developed by Harvard Business School professor and competitiveness expert Michael E. Porter in collaboration with Scott Stern of MIT, the index is founded on the principle that "what we measure guides the choices we make." To that end, the index analyzes fifty-two outcome-based (as opposed to input-based) indicators in three dimensions of social progress: meeting basic human needs; establishing the foundations of well-being that enable individuals to enhance and sustain the quality of their lives; and creating opportunity for all to reach their full potential. (For a complete breakdown of indicators, click here.)

While the index and the report (154 pages, PDF) released in conjunction with the launch of the index includes only fifty countries, those countries represent three-quarters of the world's population. Here's a chart from the report that plots their aggregate SPI scores against GDP per capita (PPP): 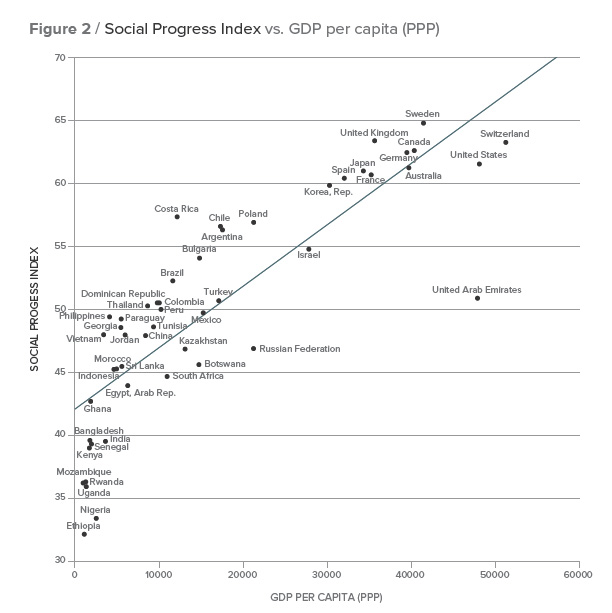 So, what do the SPI team's findings based on an analysis of a full year of data reveal? For starters, that countries' level of overall development -- as measured by GDP per capita and/or indices of global competitiveness -- often mask striking social and environmental challenges and strengths. For example, Costa Rica, a lower-middle-income country with a PPP of $12,157, ranks twelfth overall in the index, ahead of richer countries such as Israel ($27,825) and Argentina ($17,554); nineteenth in terms of basic human needs; and eighth for opportunity -- ahead of France, Japan, and Germany, all of which rank higher in terms of overall score. In contrast, the United Arab Emirates, the third-richest country ($47,893) in the SPI sample, ranks nineteenth overall, including eleventh in terms of basic human needs, but only thirtieth for opportunity and a disappointing thirty-seventh in terms of foundations of well-being.

The index/report also seem to indicate that economic development is necessary but not sufficient for social progress; that it is possible to achieve a high level of social progress at a relatively modest income level; and that while low-income countries are clustered at the bottom of the index, there is a wide range of social progress within this group. For instance, Mozambique, the poorest country in the SPI sample, is ranked fourteenth in terms of equality and inclusion, whereas Rwanda, the third-poorest country in the sample, is ranked forty-fourth for equality and inclusion. At the same time, Rwanda tops the index in terms of ecosystem sustainability, while the United States, which has the second-highest PPP in the sample and is ranked sixth overall, ranks near the very bottom (forty-eighth) in terms of ecosystem sustainability.

If by highlighting each country's strengths and weaknesses with respect to various aspects of social progress these data get you thinking differently about development, then SPI is off to a good start. "The purpose of the Social Progress Index," the report's authors note, "is to benchmark performance and motivate improvement while providing useful insights that will help all stakeholders to make better choices, prioritize investments, and strengthen implementation capacity to improve the lives of citizens."

Looking ahead, SPI plans to refine its model based on feedback and empirical testing, eventually expanding the number of countries in the index from fifty to a hundred and twenty. It also plans to form a Social Progress Network comprising partners from research and academic institutions, think tanks, for-profit and nonprofit organizations, and international development organizations "to identify the policies, institutions, legal frameworks, and financing mechanisms that can drive more effective and efficient social progress, through international benchmarking and fostering specific research projects." And it will explore the possibility of creating a Social Progress Capacity Index to measure the potential of a country's government, business, and civil society institutions to contribute to innovation in the social sector.

In the meantime, governments are paying attention, with Paraguay already having agreed to incorporate the SPI model into its national development framework. Which perhaps begs the question: How will the philanthropic sector, in the U.S. and elsewhere, respond? The index has already begun to spark discussions about impact investing and social entrepreneurship. Will foundations become more active in those conversations than they have been to date? And how, if at all, might the index change the way we approach economic development -- both overseas and here in the United States? Have thoughts you'd like to share? Use the comments section below.

Philanthropy News Digest (PND), a daily news service of the Foundation Center, is a compendium, in digest form, of philanthropy-related articles and features culled from print and electronic media outlets nationwide.